Data collection was BUSY today! The dolphins were active and playful. The underwater vis was a bit better. Kathleen observed Tilly try a few attempts at removing the remora floating over Sandy’s belly and back – with no success! Sandy and Rocky chased each other a few times and played a round of “mouth game” – on their sides, jawing at each other while seemingly trying to see whose mouth was bigger! 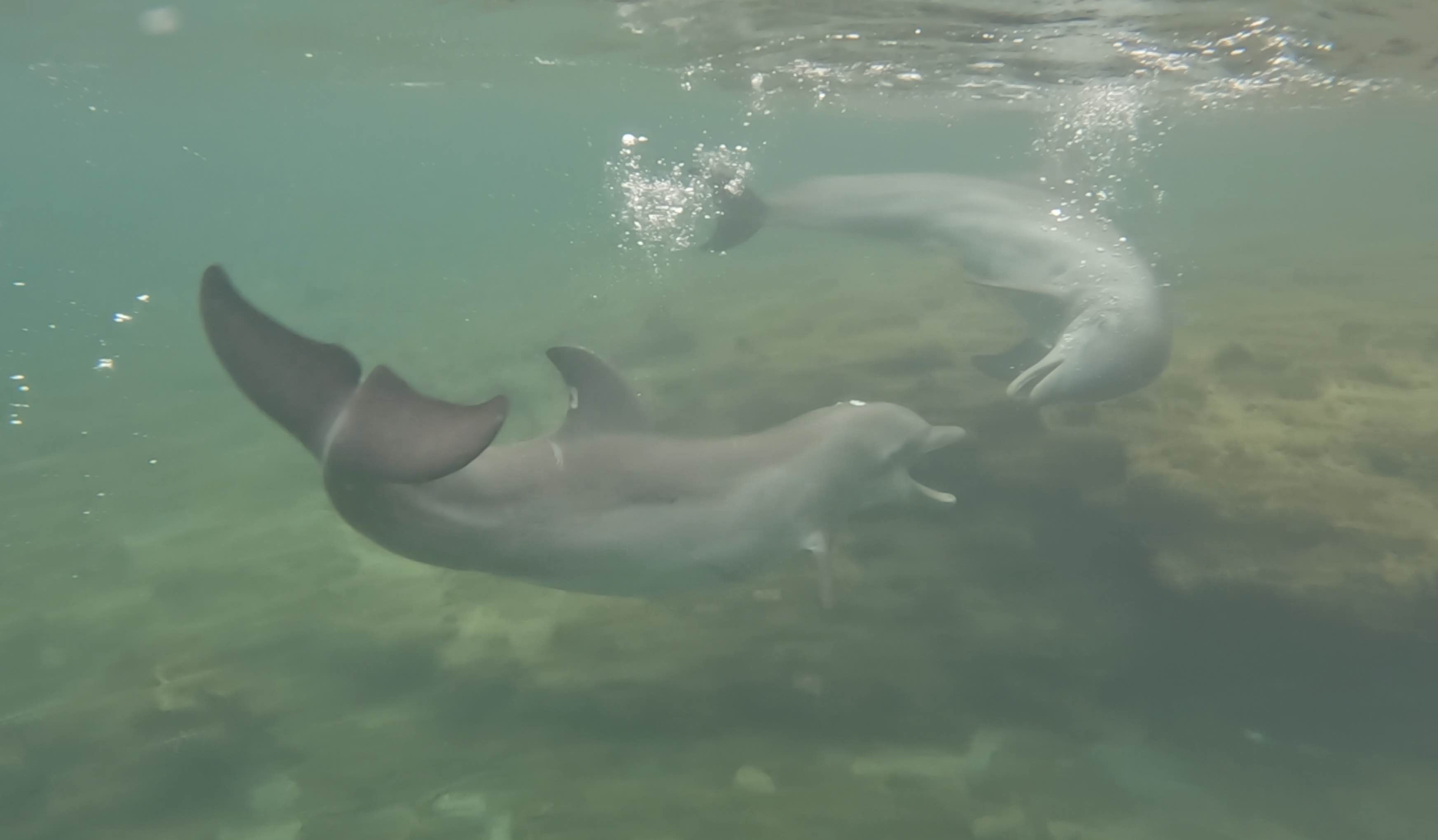 After data collection and a quick breakfast, the students had their dolphin encounter and swim. Some share their thoughts on this introduction while others comment on other topics.

Thomas – It was humbling to swim with the dolphins in their home and I’m grateful I had the chance to do so. They came by me when they wanted to be seen because I could not keep up with them.

Justin – Today, I learned you can’t sneak up on a dolphin.

Brynn – If you had told me 5 years ago that I would be holding a dolphin in Honduras for a college class, I would not have believed you.

Arianna – Shane was right when he said making eye contact with a dolphin was an other-worldly feeling.

Haylee – Similarly to Thomas, I enjoyed the swim more than the encounter because the swim felt like the dolphins were choosing without fish motivation to spend time with me and look at me.

Catalina – It was both fascinating and humbling to be present in the dolphins’ home and not know where they are until they are right in front of you!

Reagan – Petting the cats on Bailey’s Key was pretty cool but petting the dolphins was better.

Ella – Observations were fun this morning because of how active the dolphins were and I’m starting to learn I’m much better at human names than dolphin names.

Hannah – Swimming with dolphins was an experience that I never knew I needed in my life. And from the short time I’ve been here my views on training and managed care facilities has drastically changed for the better.

Maddie M – I loved swimming with the dolphins so much I could have spent all day in the water with them.

Maddie S – I really enjoyed being able to pet the dolphin during the encounter and can’t wait to see the pictures.

Cacie – Interacting with the dolphins at close range was a life-long dream come true.

Allison – It was interesting to see the similarities in between the behaviors of the dolphins during research observations versus the training session.

Selina – I finally fulfilled a dream of swimming with dolphins and Tilly has the potential to be a really good French-kisser.

Marissa – It was really entertaining to play with the dolphins using seagrass during our swim.

Shelby – Seeing the dolphins underwater during our swim was something that I’ll never forget.

Kya – Swimming with the dolphins was something I’d been looking forward to since we arrived in Honduras and the experience definitely exceeded my expectations.

Abbie – The coolest part about swimming with the dolphins was when I could hear them coming but was not sure where they were coming from – their echolocation was cool to hear.

Manon – Another good swim with the dolphins with lots of mother-calf interaction.

John – Today, I witnessed a unique mix of marine and terrestrial animals in the lagoon.

Shane – The answer to many students’ questions … swimming with dolphins never gets old! 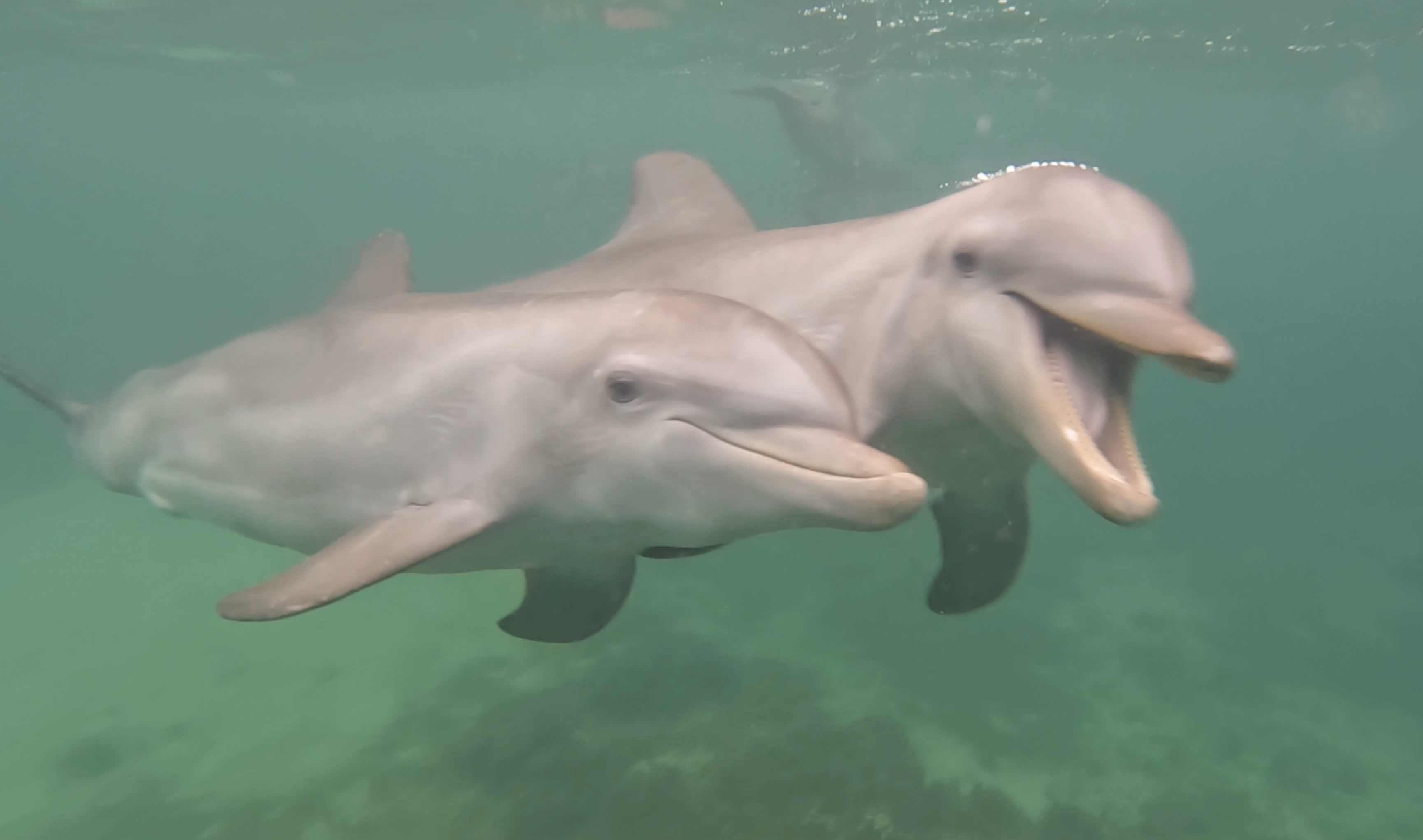 CSU Dolphin Gang plus a TX rattler with DCP