Scientists associated with the Dolphin Communication Project are busy conducting research on a number of different dolphin species at numerous locations around the world. While Kathleen Dudzinski’s main focus has always been on dolphin-to-dolphin communication, DCP’s other team members, collaborators and students have focused their research questions on a wide variety of topics related to dolphin acoustics, biology, ecology, physiology, cognition and behavior. A comprehensive, though not 100% complete, list of our study results is available on the Publications Page under the Research menu option. You can also visit the Collaborators pages under the Research menu option to learn more about details about the various research programs of our partners. (They are also available on the Our Partners page under About.)

On this page, we introduce you to a few of the research studies ongoing or nearly completion that were conducted in association with DCP or led by the core DCP team – Kathleen Dudzinski, Kel Melillo Sweeting and Justin Gregg (seen together on Bimini in 2013!) 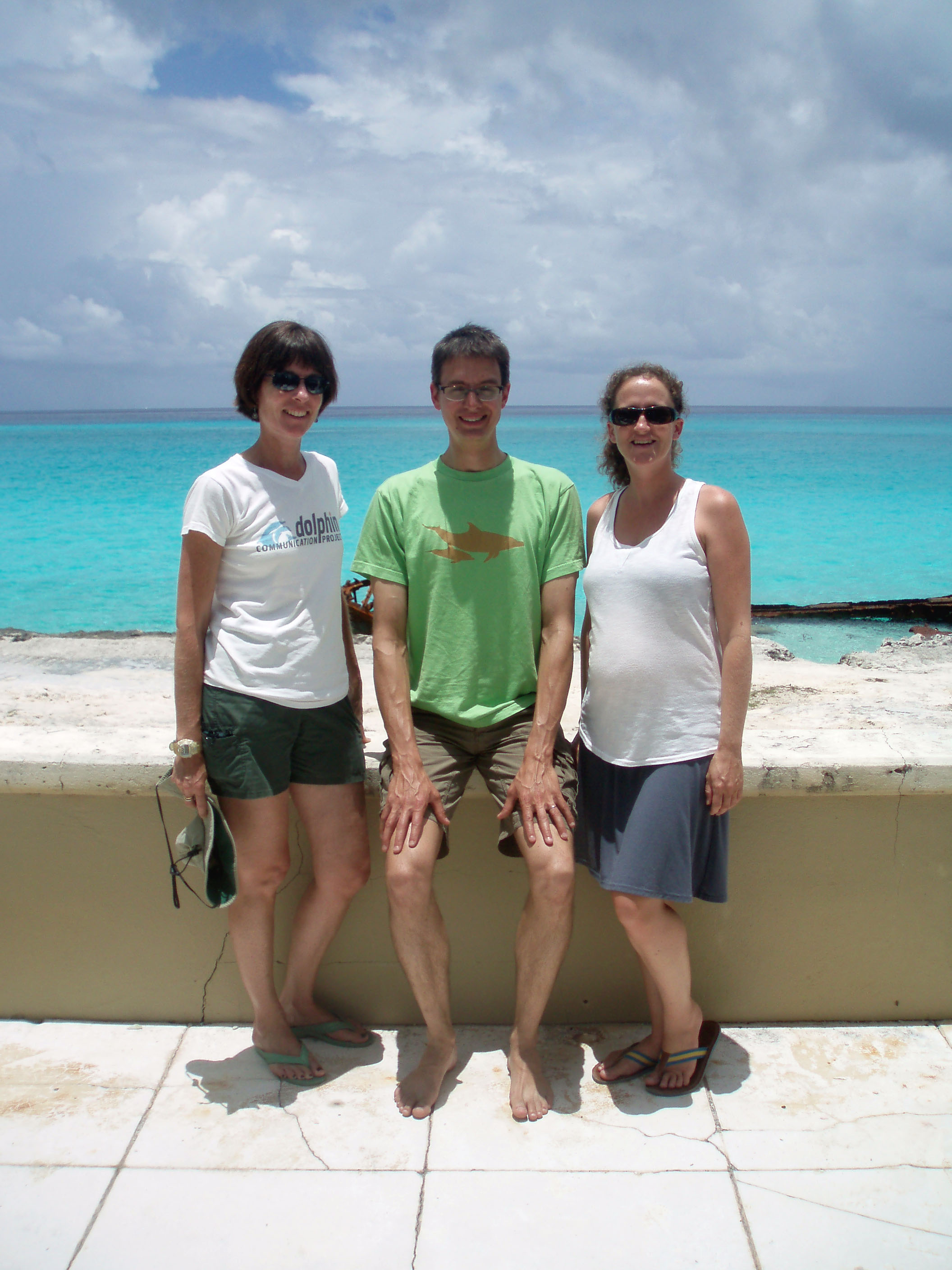 In recent years, creativity has become more and more accepted as a method of measuring cognitive abilities in humans. Tests of creativity show little to none of the bias (gender, socioeconomic status) commonly found in intelligence testing. Developing tests that can be used with non-human animals may also make creativity or innovation a valuable tool for the assessment of cognition in these species, allowing for subsequent comparisons of humans to non-humans. Our goal is to study creative responses from the behaviors produced when dolphins are trained to ‘do something different.’ Not many scientists have investigated how to best collect the data to represent the dolphins’ understanding of creativity. DCP along with other collaborators and experienced dolphin trainers developed a method for training and testing creative abilities in dolphins (Dudzinski et al., 2018 ). We developed a very strict criterion for what was considered a ‘novel’ behavior and what was accepted as different.

Watch this video to learn more about our data collection protocol and how we study dolphin creativity at RIMS.

Since about 2004, Dudzinski has focused much of her attention on how dolphins share information via pectoral fin (flipper) contacts. You can read the scientific details in several peer-reviewed papers on the Publications page under the Research menu option. A brief synopsis of our results from this research is included here.

Dolphins are extremely tactile animals, meaning they use touch as a form of communication often. DCP has been studying how dolphins use their pectoral fins to rub each other as a method for sharing information. Our first study focused on documenting every pectoral fin contact we caught on camera (via the MVA) between the Atlantic spotted dolphins in The Bahamas and the Indo-Pacific bottlenose dolphins around Mikura Island, Japan. We reviewed 12 years of data – 512 min of video from The Bahamas and 1,208 min of video from around Mikura. From these data, we documented 589 pectoral fin contacts: 139 from spotted dolphins and 450 from bottlenose dolphins! Essentially, we confirmed that how dolphins use their pectoral fins to exchange contacts – when, with whom, where on their bodies – were “conserved.” That is, dolphins in The Bahamas exchanged pectoral fin contacts very much the same as did those around Mikura Island! One exception was seen in how calves shared pectoral fin contacts between these two locations … you’ll have to read the paper to find out! The citation on the Publications page is Dudzinski et al. (2009). 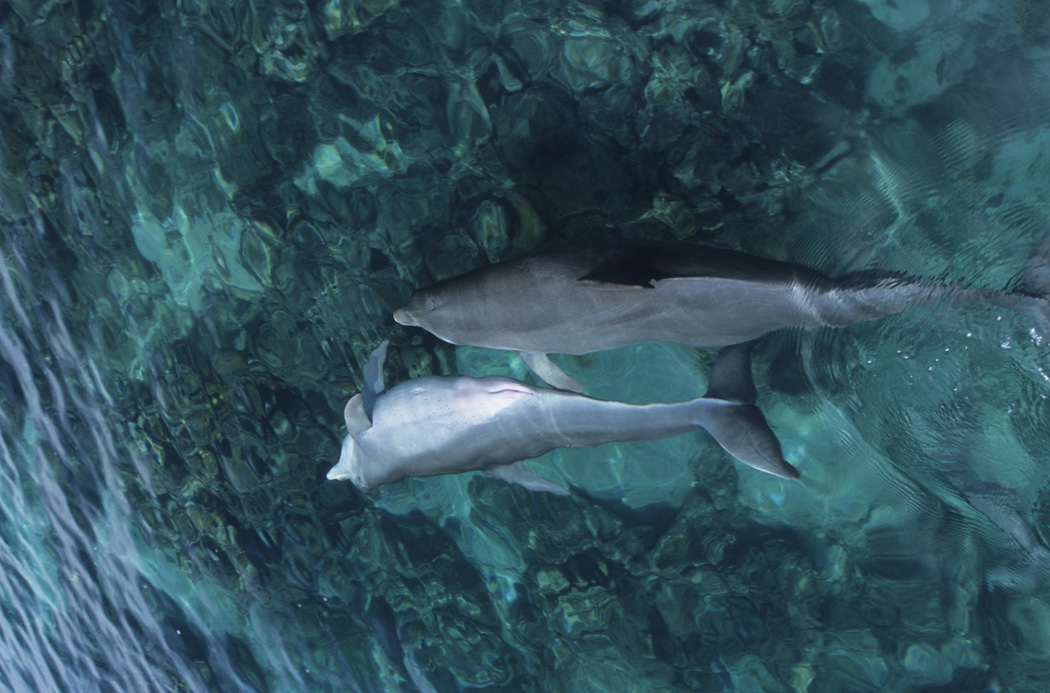 Our next study focused on comparing what we documented for pectoral fin contact among both groups of wild dolphins with the captive dolphins at the Roatan Institute for Marine Sciences (RIMS) on Roatan, Honduras. Not only were we comparing three different dolphin species (Atlantic spotted dolphins, bottlenose dolphins, Indo-Pacific bottlenose dolphins, we were also looking at three different habitats. Mikura is a dormant volcano with a boulder seafloor and little sand. The Bahamas is characterized by a calcium precipitate sandy sea floor with some sea grass here and there. The dolphins at RIMS reside near Bailey’s Cay and have sand, coral heads and sea grass along their sea floor. Additionally, with this study, we could ask whether wild and captive dolphins use their pectoral fins similarly or more differently.

As with our first set of results, we found no major significant differences between how individuals from these three groups shared pectoral fin contacts! One minor difference was that the RIMS dolphins did not share as many pectoral fin to pectoral fin contacts as did the wild dolphins (both groups). This might be related to the fact that the dolphins at RIMS did not need this particular tactile contact as a greeting. Check out Dudzinski et al. (2010) for more information on this three-way comparative study!

One interesting side note related to the amount of data we collected at RIMS: we have documented more than 3,000 pectoral fin contacts between dolphins at RIMS over an 11 year period! As has been mentioned elsewhere on the DCP web site, our return on effort studying the dolphins in human care is much higher than our return studying the wild dolphins. Still, the details we glean from both settings helps us provide the most comprehensive view of dolphin society.

In the wild and in captivity, dolphins often use their bodies, pectoral fins and dorsal fin to rub the bodies, pectoral fins, dorsal fin and flukes of peers. Dolphins will swim belly-to-belly or be aggressive with one another in courtship behaviors or with mating. Dolphins are tactile animals and are often seen in close proximity or touching peers as they travel, rest or socialize. The results from our preliminary comparative examination of captive and wild dolphin behavior suggest that touch is exchanged similarly in both settings. A more thorough study of dolphin actions, especially tactile exchanges, between both environments is likely to elucidate more subtle differences.

Comparative studies of the behavior of captive and wild dolphins can be complimentary and provide a more complete and comprehensive understanding of both individual dolphin and group behavior. Dudzinski has spent more than 20 years observing dolphins in both settings. In the 1990s, Dudzinski conducted a survey of marine animal trainers that confirmed that both researchers and animal care professionals can use information and results from wild animals to inform enrichment and assessment of animal behavior for individuals in the captive arena: categorization and qualification of behaviors was essentially the same for researchers observing wild dolphin behavior from under water as for trainers who work with dolphins every day.

For more information on DCP’s research with captive dolphin populations, check out our Publications Page on this web site. Or, to learn more about Dudzinski’s and her colleagues’ research of captive dolphins, check out the film Understanding Dolphins featuring interviews with Dr. Kathleen Dudzinski: http://vimeo.com/92797184

In October 2014, Kel Melillo Sweeting was lead author with Kathleen Dudzinski and Deirdre Yeater (SHU) on a paper submitted to Aquatic Mammals Journal. This short note is in review with the journal. If our paper is accepted for publication, we’ll post an announcement on DCP’s blog and also in the Dolphin Gazette. Here is a synopsis of our paper.

Many small dolphin species use coastal habitats either as residents or in passing. Example species that spend much time in a coastal area include bottlenose dolphins, Atlantic spotted dolphins, Hector’s dolphins and humpback dolphins. Given the fact that many coastal areas are in close proximity to human population centers, it’s not surprising that these dolphins are well-studied. It’s also not surprising that these dolphins might also be most impacted by humans in their daily routines. Dolphin daily routines are much like any social mammal — they use these areas for foraging, resting, socializing, playing, and more. Understanding how dolphins use an area will contribute to the overall conservation and management of a population, and maybe a species.

Coastal development by humans can have an impact on many other species, dolphins included. Because the west coast of Bimini, The Bahamas, is currently being developed for tourism on a larger scale than ever before in it’s history, DCP will quantify how the Atlantic spotted and bottlenose dolphins use the near-shore area off the west coast of Bimini before this development.

Check back here or to the DCP blog or Dolphin Gazette for updates to learn more about this study and for information about the pending publication. 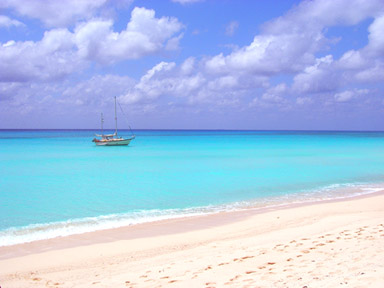 Demographics of dolphins off Bimini, The Bahamas

DCP has observed dolphins off Bimini, The Bahamas each year since 2003 (our 2001 & 2002 seasons are considered preliminary). We are currently completing an 11-year summary study of the Atlantic spotted dolphins in this area. Sightings and encounter details, including times and locations, photo-identification work, association patterns and more are all on the menu! Please stay tuned for updates on our progress, including the future publication of the resulting manuscript.

Dolphins are social mammals. One method historically used to evaluate social relationships in non-human animals is to calculate coefficients of association between individuals. These association indices are based on the amount of time two individuals spend together versus apart. But, these values may not accurately represent the quality of a relationship between two individuals. The quality of relationships in social animals is likely to be comprised of several different dimensions, namely value, compatibility, and security (Fraser et al., 2008; Fraser & Bugnyar, 2010). Relationship value refers to direct benefits gained as a result of the relationship, compatibility measures the level of tolerance that exists between two individuals and the general nature of the social interactions, and security measures the consistency of a pair’s interactions over time (Fraser & Bugnyar, 2010). Quantifying contacts between individuals of a particular species into the categories affiliative or agonistic as well as examining the approach response may help to indicate of the dimensions of value, compatibility, and security.

Fraser et al. (2008) examined components of relationship quality in chimpanzees while Fraser and Bugnyar (2010) investigated interactions and behavioral exchanges between Ravens to assess the security, value, and compatibility that might exist between dyadic interactions, for both species. We are adapting their methods for a more comprehensive study of dolphin behavior and interactions, focusing on Atlantic spotted dolphins (Stenella frontalis) around Bimini, The Bahamas, and bottlenose dolphins (Tursiops truncatus) at RIMS, Roatan, Honduras, to understand and characterize the quality of relationships between dolphins. To address this topic of study, we are currently analyzing the DCP data archive for these two dolphin groups with emphasis on all tactile contact behaviors, the response to approach and object play details. We hope to have preliminary results ready in mid-to-late 2015. Stay tuned!