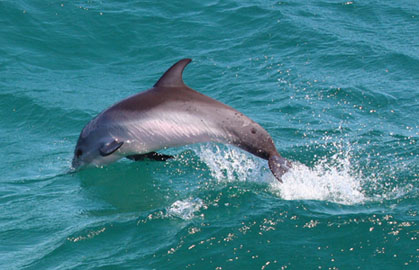 Another windy day, Tuesday began with more photo ID and office work.  It was actually rather sunny at some points which bode well for our afternoon boat trip. We left just after 14:30 and battled against the wind on our usual path to find dolphins. The waves quickly grew in; nevertheless, we persisted, and an hour and a half after setting out we found a group of Atlantic spotted dolphins. Well, perhaps I should say that they found us as we did not see them until they were directly in front of the boat and only about 10 meters away. This turned out to be a group of 9 dolphins, including Split Jaw (#22), six other sub-adult/adults, one juvenile and one calf. The group was extremely social and we could see them rubbing their pectoral fins together and along each other’s bellies. They also seemed very playful; many of them were fast-swimming and riding the waves. I even saw one of the older dolphins swimming with a piece of sargassum hooked on its fluke and the young calf was chasing the seaweed with an open mouth, almost as if they were playing keep-away! The waves were so big at this point that the people lying on the bow were as close to the dolphins just below the surface as they would be if they were swimming alongside them!

These dolphins stayed with us for over half an hour before they fell behind a bit. When they had caught up to us again they were suddenly a group of 13! This group now included Lil’ Jess (#35) and a bottlenose dolphin, though this individual did not swim along with the boat for long. We lost sight of this assembly about 20 minutes after the new dolphins had joined in. It is amazing how easily a group that size can simply vanish!

Another 20 minutes later we were on our way home when we spotted another dolphin! It turned out to be a group of three Atlantic spotted dolphins, including Prince William (#64). Just as we thought we had lost sight of this group, we suddenly saw three more dolphins—but these were completely different individuals! This time it was a mother-calf pair and un-named #99! I wonder if Leslie (#80) was hiding, close by. There was a lot of leaping and bow-riding.  As we were watching the dolphins from the bow, we were surprised when the mother-calf pair suddenly leapt out of the water directly towards the bow of the boat. Just as the boat rose up on a wave, the two dolphins slipped into the sea barely two feet from the front of the bow! It was an incredible display of the gymnastic talents of dolphins, as well as their amazing ability to perceive how the world moves around them. I was sad that I did not have a camera handy but I think that the image of the synchronized pair will forever be imprinted in my mind.

After we lost sight of these three dolphins, we continued our way home. We had to speed up a bit as there were at least two squalls approaching rather quickly. We did make it back to the marina without getting rained on and we were still smiling from our remarkable dolphin experiences as we stepped on the dock. It seems that even lots of wind and waves can’t get in the way of great dolphin sightings. We look forward to finding out what the rest of the week will bring.

Until next time,
Nicole & Kel