On 6 May, we headed out early, departing the dock at 9:05 a.m., in search of dolphins. We saw our first group almost immediately! All the dolphins were bottlenose and there were at least 9 in the group, including at least one calf that was swimming alongside an adult. They were traveling, with lots of synchronized surfacing. At one point, they split into subgroups and we followed one of the smaller groups. One dolphin did a series of chuffs and tailslaps; later, there was another set of tailslaps. We followed this group until 10:43, at which point we decided to leave these traveling dolphins and look for more. But first, some of took a swim break and the folks on the boat saw a subgroup pass right past the swimmers!

At 11:25 a.m. we spotted Atlantic spotted dolphins! There were 8 dolphins in this group including 3 calves. The first group of students entered the water at 11:36 for a quick look; then the second group got in at 11:48 for their turn at a quick glimpse. Even though both groups had the same length of swim, the dolphins were closer to the first group. At 12:03 p.m., it was time to head back to shore for lunch. 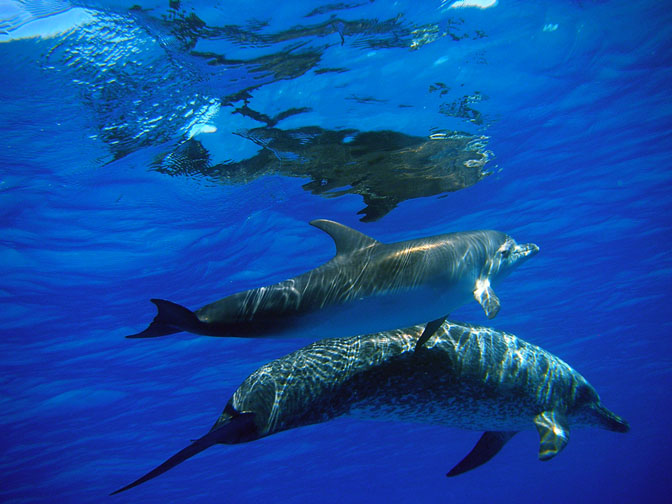 Soon after lunch, we went straight back to the boat – this time a larger boat, the Hatteras. At 14:45, we left the harbor, in search of more dolphins. The seas had calmed significantly, the water was clearer and the air was hotter! We first saw the dolphins at 16:32 – it was another group of 8 Atlantic spotteds. We sent three people in the water to test whether or not the dolphins would stick around; about five minutes later, everyone was able to join in. The spotteds were crater feeding a bit and some got very close to us. Again, we were able to tell when the dolphins used their echolocation to investigate us. They were at the bottom for much of the time, but when they surfaced to breathe they came quite close to us. After our long swim, we caught back up to the dolphins and had a shorter underwater observation. They ended up leaving us, but as the boat pulled away, some of the dolphins came back for a quick bow ride. At 17:43, we lost sight of the dolphins for good and continued toward home.

Back at the hotel we had a turkey feast. We were all exhausted from our double boat trip, so when we were told we’d have an evening lecture on the evolution of odontocete jaws, we were ecstatic – nope! Thankfully it was just a joke.

One day left in paradise,