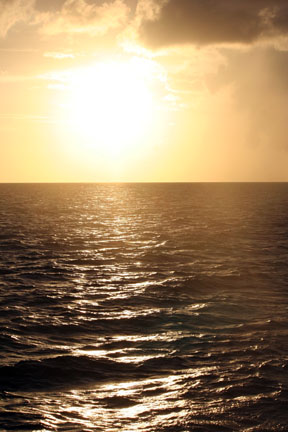 Thursday began as a beautiful and sunny, though quite breezy, day. We put in a few hours of work and then set off on our dolphin quest as usual. By this time, some clouds had set in and we knew it might mean rain for us out on the water. Sure enough, just an hour after setting out we encountered our first rain storm. After scrambling to protect the equipment that is not waterproof, the rain stopped. We had just resettled with our clipboard and not-waterproof equipment when it began to rain again! The weather certainly is as unpredictable as the dolphins we set out to find! Fortunately, this was the last rain storm that found us on the boat. From our position on the water, however, we could see three other storms that were raining on other parts of the ocean.

About an hour and a half after the rain left us, we came across a group of at least five spotted dolphins! There was at least one mother-calf pair in this group and the youngster certainly seemed to enjoy swimming in the bow. It would swim with the boat for a short time, swim back to the group of older dolphins and then return to the bow. The group seemed tolerant of the boat idling near them so Captain Al gave us the go-ahead to put on our gear. Just when we were all ready to get in the water, we lost sight of the dolphins. A few minutes later, we were able to relocate the group and again got geared up. This time, the guests were able to get in the water for a brief encounter before the dolphins disappeared once again. We set off once more and after a few minutes a calf suddenly leaped out of the water. It was the same little one who had been swimming in the bow! We quickly lost sight of the calf but about ten minutes later we came across a group of twelve spotted dolphins! We geared up for the third time and were able to briefly observe a mother-calf pair in the water before the dolphins swam out of view. It seems that extended underwater observations were not meant to happen today. We are still so happy that we were able to see a playful calf and perhaps gain some identification details from our observations from the boat! Any day that includes dolphins is a good day, even with a bit of rain and wind! And all observations, whether from the boat or in the water, are useful. We are so excited to head out again soon!