DCP is pleased to welcome our 2013 summer interns, Nicole and Salma, to Bimini! After working hard at our Connecticut (USA) office for the last six 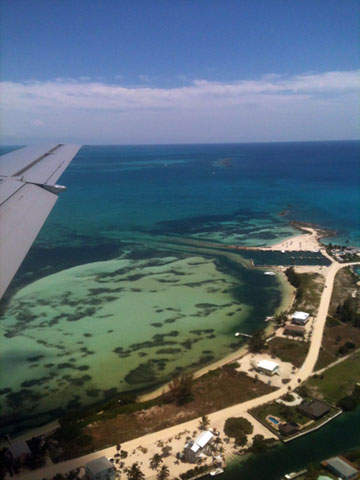 weeks, they made way their way to our Bimini field site on Monday.

Nicole: I started the trip to Bimini a day early with a drive down from Connecticut to the Newark airport where the first flight would take off. Monday morning began with impressive New Jersey traffic but I still made it in time to check in. An uneventful plane ride to Ft. Lauderdale later, I walked across the tarmac to board the prop-plane (with pink engines!) that would take me to Bimini.

Salma: My journey to Bimini, on the other hand, was a chaotic one. Despite arriving at Dulles International two hours prior to the departure of my flight to Cleveland I missed it by a few seconds and was put on the next flight to Chicago which departed 2 hours later! The next two connecting flights were a blur. I almost missed the LAST flight to Bimini because of a short lay-over time but the woman at the booth radioed the men on the tarmac to hold the plane and luckily they waited for me!

Watching those beautiful islands come into view from afar was so breath-taking. We have never seen water this clear except for in photographs. Once on the island we realized that we had been on that plane together without even knowing it! We automatically fell in love with the Bahamian accents that the residents donned. Everyone was so nice, and even the immigration officer greeted us with a smile and a joke to get the others to hurry up inside the airport. They didn’t keep us there for very long, and so we boarded the bus that would take us from the small airport to the water taxi. Salma was in the front seat and boy was she confused when the bus driver drove on the left side of the road even though the steering wheel was on the left side of the vehicle! What a surprising mixture of British and American driving! The water taxi ride turned out to be less than five minutes and suddenly we were on North Bimini Island!

It was immediately very clear that this would be an amazing experience. Everyone here seems to know one another and even if you don’t know anyone, every other person will wave and smile at you and greet you as if you hadn’t just arrived to the island earlier that afternoon. We even got a ride to our hotel from a very friendly woman who saw us struggling with our bags! After settling in we decided to explore the island. We were lucky enough to have arrived on a beautiful sunny day so we started by going to the beach. The sand was so white and soft, the water such an amazing shade of blue, and the whole experience so awe-inspiring, that we didn’t want to leave so we started walking instead. We made it all the way to the other end of the island and there we met another generous soul who gave us a ride back down the main road to the Sea Crest. Oh, did we mention that the major form of transportation on this small island is in the form of golf carts?? How clever!

Our second and third days here have been a bit rainier than the first but we are so excited to be here! We cannot wait to go out on the water, meet some new people on the eco-tours and to of course meet some dolphins!