It is amazing how swiftly we can get into a pattern … early morning coffee, plus pastry, then data collection (twice) followed by logging notes, lunch, and then an afternoon dive for Ron and video review for me. This is a pattern I welcome!! And, one we have followed each day this week. Once more tomorrow …

I was greeted by continued good underwater visibility, though there was a bit of freshwater from an early rain squall at the surface. Several dolphins greeted me on entry (see cover photo of Stan, Tank, Champ, Elli, Lenca). This morning’s data collection also featured several “wrestle” sessions among the dolphins. 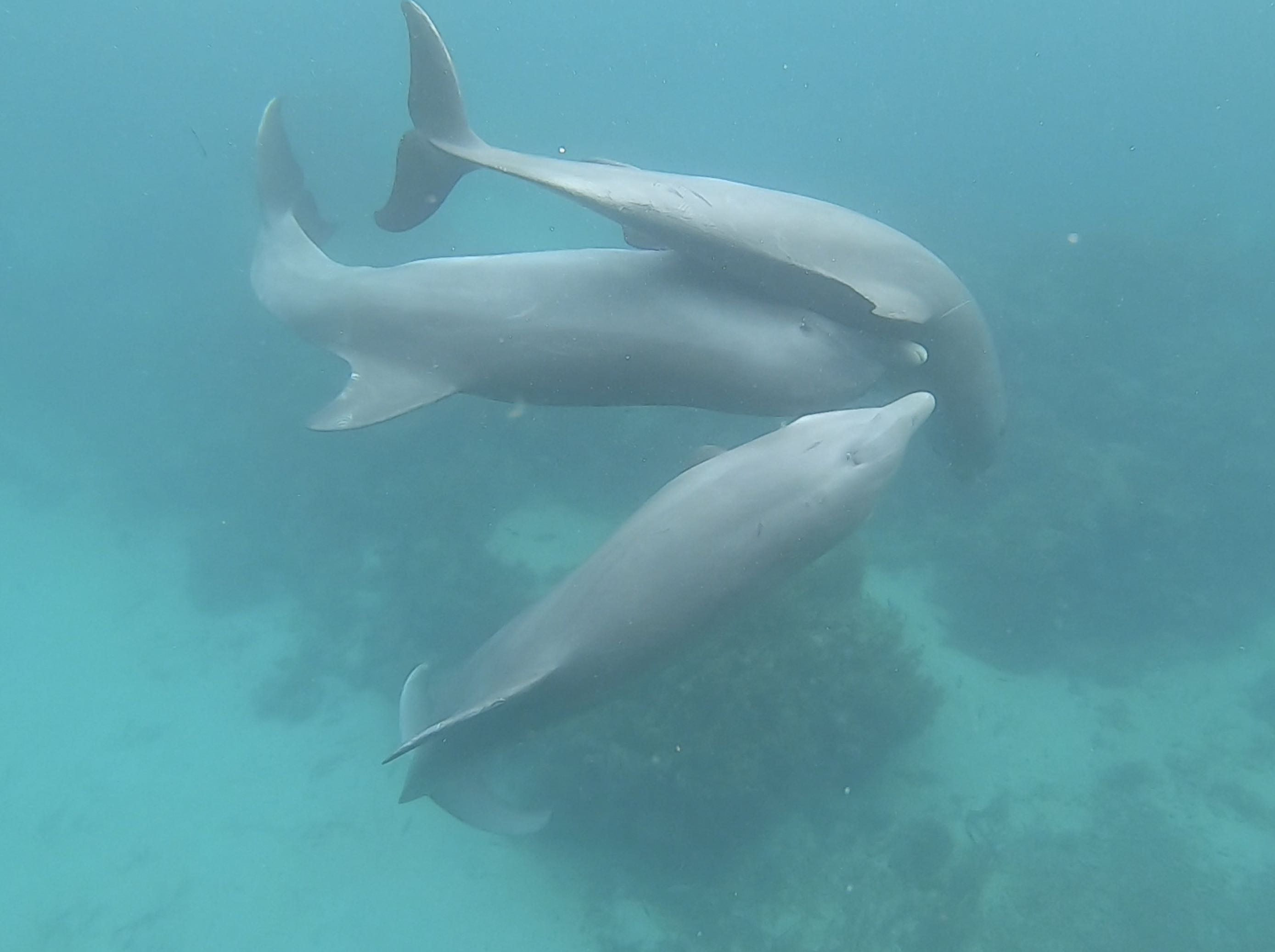 Usually, it’s 3-4 male dolphins rolling all over each other while periodically mounting each other and chasing each other. Lots of whitewater and bubbles are associated with these events! Elli and Poli also joined in several of these bouts this morning. In these photos you can see a bit of the wrestling and also Elli, Stan and Tank!

The mom/calf pairs stayed away from the fray of these rambunctious younger dolphins. Still, I was able to observe Sandy and Tilly doing a bit more hunting and fish chasing. And, Alita and Rona were social – Alita was nudging Rona along and they also shared some pectoral fin contacts. I spent a total of ~45 minutes observing the dolphins during this first morning session. Once out on the platform, I usually spend a few minutes observing any of the dolphins who come by. As I was doing this, I heard a loud splash … thinking a dolphin leaped nearby, I scanned in front me … but nothing. Not even a ripple. Then, I heard the security guard yelling … and turned around to see Ron bobbing in the water adjacent to the dock! He’d spied what he thought was a Styrofoam ball and tried to retrieve it only to lose his balance. The item was biodegradable and turned out to be a pealed pineapple! Ron’s ego was the only thing bruised during this incident as he walked out of the shallow water. Ron has the distinction of being the only person to accidentally fall into the water – in a back holding area – during a DCP eco-tour to AKR/RIMS!

The second morning observation session was shorter because the visibility decreased. This gave us more time to log the surface observations/data and then review the video footage. Neat stuff! 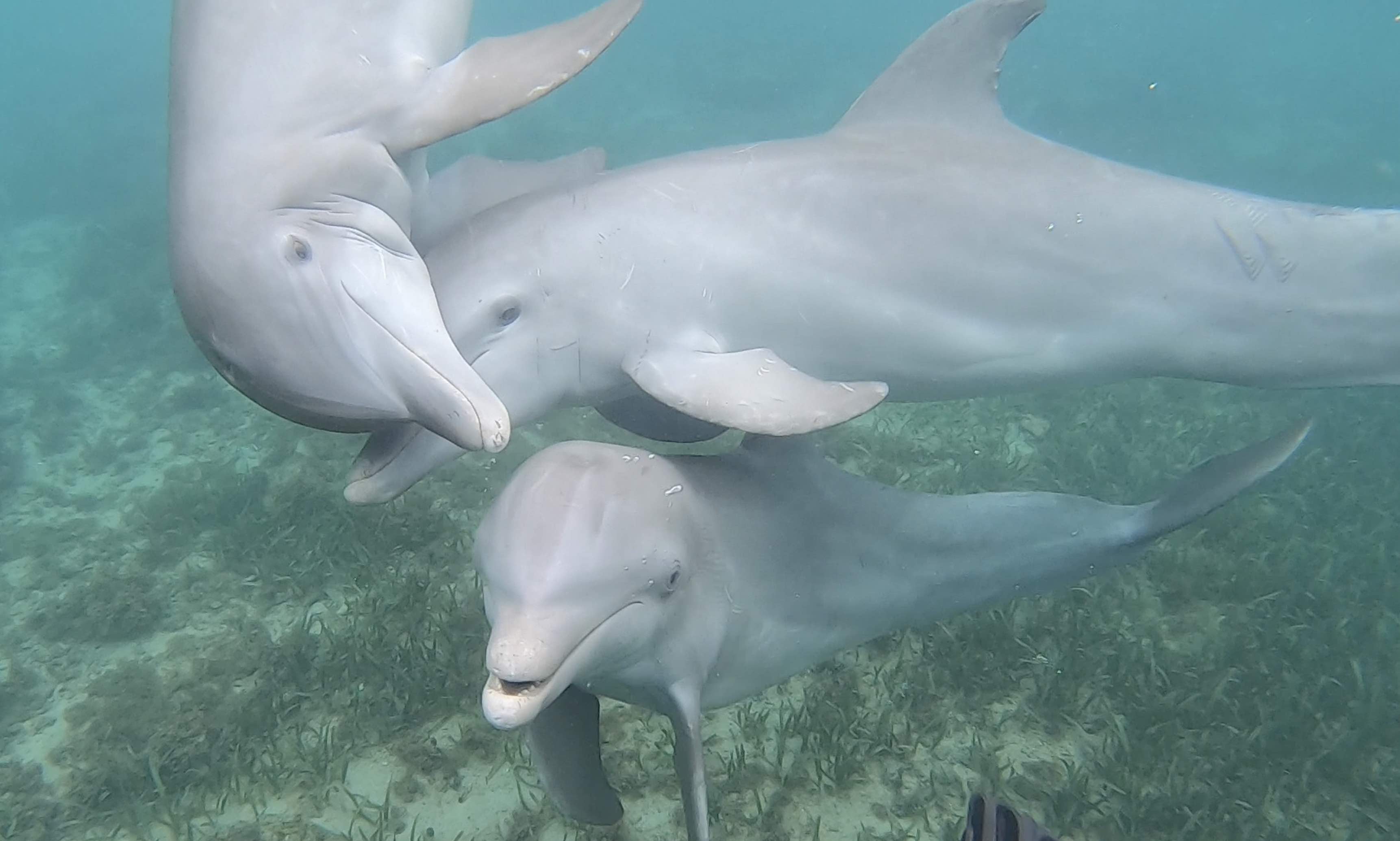 he returned with a huge smile … and told me the dive was “shitty” in response to my query “how was your dive?” Turns out, the dive site is called “Green Door Outhouse Reef!” The outhouse is no longer present having been dispatched by a hurricane of the past. But, the site was originally named because of a vivid green door on an outhouse along the shore for where this reef is. Ron tells me it is often a night-dive spot. They saw a turtle, scorpion toad fish, crabs, a grouper at a cleaning station, French angle fish, and many more along the wall that makes up the reef in this spot. Everyone had a great time!

Tonight’s dinner was Fiesta Night, which is typically a buffet dinner with fun activities on Anthony’s Key. Because of social distancing, dinner was in the dining room and there were no activities … still, the dinner was BBQ and very delicious! Some guests chatted, from 6+ feet away as the tables are spaced, which was not quite the same as the limbo contest or crab races. It was a good evening.

Tomorrow is my last day for data collection on this trip. Until then,