Dr. Marie Trone arrived back to the Amazon Dolphin Acoustics Lab (ADAL) in June 2017, to begin her summer field season.  While in the Peruvian Amazon, Marie plans to explore the high-frequency echolocation produced by the Amazon pink dolphin (Inia geoffrensis) and the gray dolphins (Sotalia fluviatillis), as well as study their behavior.  During the 2017 spring semester, her students devised an application to be used on 10” Android tablets that documents the locations of dolphins when sighted at the surface of the water.  Thus, the position and direction of travel of each dolphin documented in relation to the location of the hydrophone array, as well as size, color, energy level, swimming activity, and any special behavioral status such as group composition, splashing, feeding, etc. could all be documented with a time stamp.  These data can be downloaded into an Excel spreadsheet to facilitate pairing acoustic emanations produced by the dolphins and behavior.  One goal this season is to create a catalog of sounds associated with animal positions to further clarify the exact acoustic signal produced by a free-ranging, morphologically unique dolphin, Inia geoffrensis!

In the photo with this blog, you’ll seethe Android application is used to pair dolphin position and behavioral data with acoustical recordings.

The picture below is the array supporting 4 high-frequency hydrophones and two GoPro cameras. 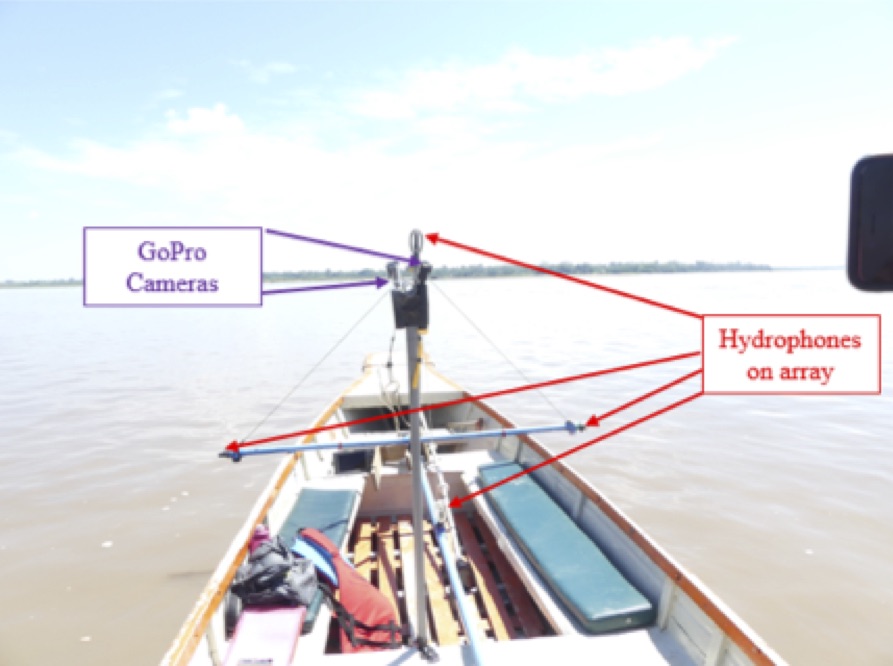