Psychologists have learned that holding an otherwise innocent object in your hand – like an umbrella – makes onlookers perceive you as more dangerous than if you were empty-handed. This same, subconscious fear of weapon-like objects is lodged in the minds of many of our primate cousins. Our closest relatives – chimpanzees – appeal to this weapon-fear bias by waving tree branches and logs in the air when trying to make themselves look larger and more intimidating. And by golly it works. As anyone who has spent time in the African jungles can attest to, a giant male chimpanzee screaming and running at you with a tree-branch in his hands is full-on terrifying. This is one of the reasons I prefer to study dolphins. They don’t have hands, so the chances they will club me or my fellow researchers to death in the open ocean are small.

Or so I thought.

It now appears that dolphins are known to wield weapons too. The Amazon river dolphin – also called the boto – has been observed carrying tree branches in its mouth. Since these river-bound dolphins live quite close to vegetation, it’s easy enough for them to get their hands mouths on weapon-like objects. They have been observed jutting their heads out of the water and waving sticks or branches around – a lot like chimpanzees.

Why do botos do this? Nobody has witnessed them actually assaulting other botos with their makeshift weapons, so it’s probably not meant as a tool to punish rivals. Then again, chimpanzees usually don’t hit each other with sticks – they just brandish them as a means of looking tougher. This is probably what is happening with the botos as well. It’s almost always the males who engage in this stick-thrashing behavior, and almost always when they’re around other males. Most of the time, these stick-carrying bouts end in some sort of aggressive encounter between the males. Tail slaps, biting, ramming – all kinds of unfriendly dolphin stuff. 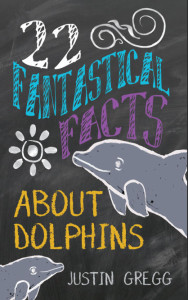 Unsurprisingly, stick-wielding is often witnessed at times of the year when the females are most fertile. So it seems likely that males are trying to impress the ladies or otherwise scare their rivals by carrying weapon-like objects in their mouths. It might well be that the male dolphin who carries the biggest stick also has the best luck when it comes to mating.

Carrying sticks or other objects is an awkward thing for a dolphin to be doing. It will slow them down as they swim, and make it impossible to eat. Like much of dolphin behavior, it’s still a mystery as to why they do this. But I can guarantee you that a giant male Amazon river dolphin charging at me with a stick in its mouth is enough to keep me from wanting to swim in the Amazon. Well, that and the piranha.