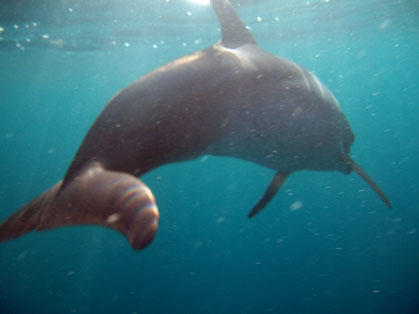 On Friday Lauren and Alexis went on another dolphin trip with Bimini Adventures. On our way out to the dolphin grounds the guests decided they wanted a quick snorkel swim along Bimini Road (also thought to be the famous city of Atlantis). This was Lauren’s first time at Bimini Road so she joined the guests for a quick glimpse to see what all the hype was about. Meanwhile Alexis stayed on the boat and happened to see a turtle swimming not too far from the snorkelers. The turtle hung out around the boat until everyone was back on board and once on board we continued our way to find some dolphins. With over 2 hours passing and not even a glimmer of a dolphin we were tempted to think our luck had run out. Then all of a sudden a group of 7 spotted dolphins appeared in the distance, reminding us that sometimes the search just takes time. Within this group were 2 adults and 5 juveniles and a few playing with seagrass. The highlight of the surface observations was, however…drum roll…a sailfish swimming among them! Even Captain Al had never seen this mixed species grouping before. The dolphins quickly took interest in the boat and began to bow ride. With all seven dolphins riding the bow, we decided to try to join them in the water. The dolphins were swimming too quickly at first but eventually they slowed down enough for us. At this point there were only 2 of the juveniles left, but, nonetheless, we got in and were able to record underwater video, acoustics and stills. The two dolphins included a young female with an interesting spot pattern (possibly not yet catalogued), as well as a male that we believe might have been unnamed #104 (Swoosh’s independent calf). It was getting late so it was hard to be positive about their ID’s, but hopefully we’ll be able to confirm this once we review the data. After a while, the dolphins seemed to have moved on, so we jumped back on the boat and hoped the dolphins might continue to join us on the bow. To everyone’s delight, they did and four dolphins including our 2 juveniles from the encounter rode the bow for almost 10 minutes. Eventually they swam off and we all assumed that was it. But to our surprise 3 different juvenile spotted dolphins joined us for another quick bow ride. Eventually, all the bow riding ended and we resumed our course home, pleased to have spent the day observing these fun and playful dolphins!