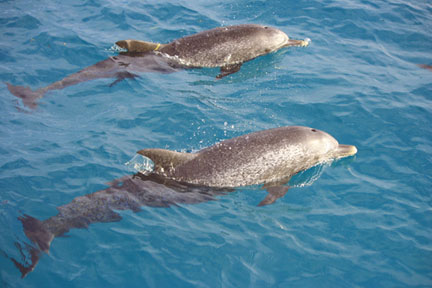 Sunday and Monday brought several thunderstorms and rough seas, which in turn meant canceled boat trips. So, by Tuesday we were ready to get back on the boat and find some dolphins! The afternoon seemed to be turning out unsuccessful again, and we all were thinking the curse of Kel was back! Finally we ran into a group of about 8 spotted dolphins which included Stefran (#82, pictured here), Niecey (#48), Swoosh (#36), and Inka (#93)! Inka and the other young dolphins were jumping out of the water and we even saw them play with some seaweed! The group was moving very quickly, but with light fading it was our only opportunity to try to observe the dolphins underwater. The passengers got in first, and got to see the dolphins passing by. When Kel got in the water it was the juveniles who gave her camera a quick swim-by. Even after an enticing bow ride, it was clear that they were not interested in us!  Immediately after everyone was safely onboard and we were headed home, a group of 6 spotteds were riding the bow. At first we were prepared to discover the same dolphins, but then it was clear these were different! We recognized Speedy (#78) and a dolphin whose left pectoral fin was shrunken (well, likely injured, but it healed well!). It was too late into the day to try an encounter, but we were all happy to be back on the boat and see dolphins that we knew!

All for now,
Lauren, Alexis, & Kel