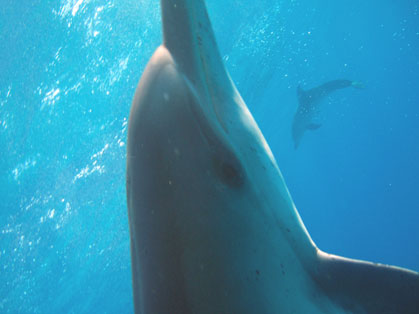 Tuesday began with a beach cleanup for the Bimini team! We collected 10 garbage bags and 2 recycling bags worth of trash around the south tip of North Bimini. It was a great way for us to give back to the island by means of leaving it cleaner than when we found it!

In the afternoon the interns went out on another boat trip with Bimini Adventures (again thanks to the donations of those supporting DCP). The trip started out with a very small shark swimming super-fast along the surface! Roughly an hour later we came across a group of 4 small spotted dolphins. The group consisted of 2 tiny calves, one sub-adult, and one juvenile. They were very playful, riding the bow and zigging and zagging across the water surface. Soon after, 3 more dolphins, specifically 2 calves and Inka (#93) joined the group. At this point we decided to hop in the water and see if the dolphins would stick around. Our first encounter was fairly brief as the dolphins stayed on the periphery of our group and the water chop made it a bit more of a challenge to keep up. We got back on the boat and decided to try again. Everyone geared up, while captain Audley positioned the boat better for us. Everyone slid back in one more time hoping the dolphins might be a bit more interactive, and to our delight they were! We observed the young dolphins for just over 30 minutes and during this time were able to see an attempted nursing event, object play (with some garbage, which we eventually balled up and threw away) and to our surprise, more dolphins which join us in the end. By the end, we had at least 10 young (mostly calf and juvenile) dolphins, as well as 2 bottlenose in the mix. In this larger group we also saw Speedy (#78), Juliette (#12), Niecey (#48), and unnamed #99. After all that fun it seemed like the dolphins were done with us so we climbed back on the boat and headed toward shore. On our way in we were greeted by 4 more spotteds who sneakily snuck up to the bow of the boat undetected. Only once they started bow riding did we even realize they were there. They took a quick ride with us and then left us behind as we continued home.

All in all it was an amazing day; one we were lucky to be a part of!! Thank you all and hopefully our week will continue with such luck!