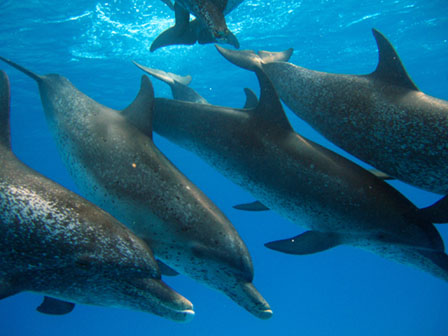 Monday was another perfect day on the water for the interns; we secured research spaces with Bimini Adventures thanks to the generous donations of DCP supporters! Much like yesterday, we sighted a group of crater feeding bottlenose dolphins not long after leaving the dock. They seemed very busy at work, so we passed by with the hope of finding a more interactive group. At 16:15 we were victorious, meeting up with at least 20 very playful Atlantic spotted dolphins. There were many males in the group, including Prince William (#64), Split Jaw (#22), Speedy (#78) and #104 (Swoosh’s unnamed, now-independent calf). Leslie (#80) and her calf (unnamed #99) were also in the mix. We slid into the water for an encounter, which turned into five separate encounters because the current kept carrying us away from the dolphins. Although we repeatedly had to leave the water to catch up with them, the dolphins did not mind our presence, and altogether we stayed with the same group for two hours! We were delighted by this group’s antics, as we observed a variety of interesting behaviors, including pectoral fin contact, body rubbing, leaps, “object play” with seaweed and even jaw claps and tail slaps,. At one point a group of five dolphins settled themselves onto the sand, resting still on the sea floor as if lying in a bed. In another instance, Alexis was filming one dolphin who stopped swimming to hang vertically in front of her camera, as if it was having a staring contest with her! As you can probably tell, it’s so much fun swimming with a large group of interactive spotteds, but it also gives us the chance to document tons of dolphin communication and general behavior! After we eventually left this group to head home, we had one more happy moment of sighting another group of spotted dolphins. There was a very tiny calf among them who leaped clear out of the water as if putting on a show for us! Needless to say, we are all feeling ecstatic after such a fabulous day; thanks again for getting us on the boat DCP supporters!

PS: Not sure what we’re talking about with these “thank you supporters” references? Kel did a mad-dash fundraiser this week to help ensure research space on the boat. You can continue to support our research efforts by making a donation today!