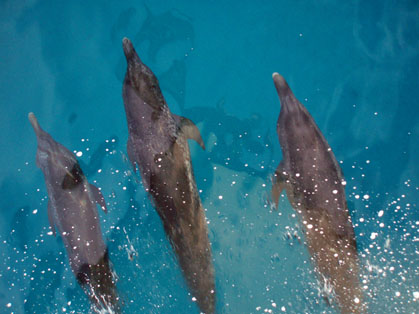 Tuesday was a day full of dolphin trips! Kel departed around 13:00 with Bimini Adventures. Even though Kel and crew stayed out until almost 18:00, they unfortunately didn’t see any dolphins. Though that was a bit of a bummer, spirits are still high as this crew has a few more days on the boat.

The intern trio also had a boat trip (with Bimini Adventures, as well), which left around 15:00. Aside from seeing a sea turtle and a shark swimming above a small reef, they were off to a similar start: where were the dolphins? But then, after the boat had already turned around and started heading back toward Bimini, Alexis spotted a group of four bottlenose dolphins at 17:59. They seemed to be sticking around, so we jumped in the water for a very quick encounter. We were surprised to see the bottlenose not crater feeding, but rather in a group social ball which involved a lot of pectoral fin and body rubbing. The encounter was brief (but exciting) as the animals were much less interested in us and moving fairly quickly. Almost an hour after we first saw the bottlenose, a group of four spotted dolphins (including 2 very small calves) came swimming right up to the bow of the boat. We once again geared up and hopped in for another very quick encounter. Like before, the dolphins seemed less interested in us and more interested in getting a free ride from the wake of the boat, so we jumped back onboard. Luckily for us, the dolphins were still very interested in bow riding and along with three additional spotted dolphins, rode the bow of the boat for over 15 minutes. We saw some familiar spots in this group including those of, Split Jaw (#22), Speedy (#78), and Prince William (#64, all pictured here). It seemed as though the boys were having a bit of a joy ride this afternoon! Eventually all the dolphins left and we continued on our way toward home. Off in the distance captain Audley spotted a few dolphins (likely bottlenose), but as it was getting late we continued home to shore.

Both Kel and the interns have more dolphin trips tomorrow, so hopefully we will both come back with exciting news of dolphin sightings and encounters!

Catch ya on the flipside,
Lauren, Amy, Alexis, & Kel