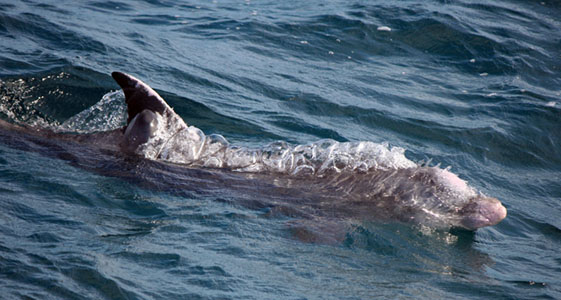 On Wednesday, we had a general dolphin discussion as we had read the first two chapters of Dolphin Mysteries before class began. Then, we got a more formal introduction to DCP, learning about their field sites and programs.

Our boat trip began with a snorkel stop (The Bimini Road, aka Atlantis). It wasn’t a reef, but there were fish everywhere! We thought that there might not be much fish around an area without coral, but we had never seen so many fish. Before we even arrived at our snorkel stop we saw flying fish. As for “Atlantis” itself, it looked like slabs of rock lined up, but it’s hard to recognize if it might have once been something. After snorkeling, we went what felt like a long time searching for dolphins. At 17:28, we saw our first bottlenose dolphin! It wasn’t very interested in the boat, but we circled and were able to see it again. Then – there was a different bottlenose dolphin, so we know there were at least two individuals in the group. Since they weren’t interested in us and they were hard to keep tabs on, we continued on in search of other dolphins.

At 18:07 there they were! A group of six Atlantic spotted dolphins, including 3 calves. We were able to observe this group for a good long while. In that time, Kel is pretty sure that she saw un-named #99 and we saw one dolphin breach. We were able to observe this group under water. We were extremely excited when we first got it and we could hear them right away; but we found ourselves searching for where exactly they were! They seemed very curious about us, swimming towards us. We practiced our free diving skills and saw them investigating something on the sea floor. They were definitely investigating and focused on something on the sand – we couldn’t tell what it was. It started with just some of the dolphins, but soon all six were investigating. During this time, we could not hear them vocalizing, but they were touching each other a lot – tactile communication! It was definitely cool to see how they did not seem to be bothered by us. It seemed like they were doing their own thing, allowing us to watch. The boat did a circle at one point and afterwards the dolphins swam through our group very fast! After they were out of view, we could still hear them. A great first experience!

Back on the boat, we were headed toward home and ran into more spotted dolphins at 18:48. Again, there were six dolphins, including 3 calves, but we’re pretty sure it was a different six dolphins. Kel thinks she saw Noodle (#94) as the dolphins were riding the bow. Toward the end of the observation, an adult and an older calf were bow riding, but a younger calf was coming in and out, bow riding, then leaping out of the water. At the stern we saw the other dolphins surfing in the boat’s wake.

It was extremely exciting to be in the water with wild dolphins. Especially after what felt like a long wait while we searched for them! Can’t wait to see what the rest of this course brings!