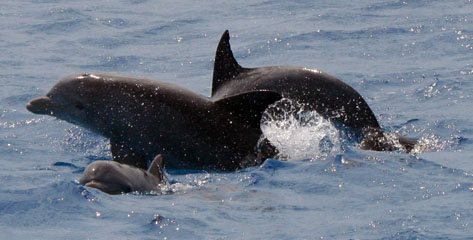 Wednesday, the sun was shining and, like the last week, the wind was gusting. The forecast called for rain and scattered thunderstorms which had us wondering how our boat trip would go in the afternoon. Fortunately, a little rain didn’t stop us from getting out so we set off at the normal time and hoped for the best.

We had not gone far when we came across another boat that had found a group of about ten bottlenose dolphins. It seemed that these dolphins were feeding as they were not traveling far and would disappear for long periods of time. We watched this group for a bit and then continued on our usual course. At first this trip seemed calmer than earlier in the week—the waves were not as massive and the wind was a bit less forceful. Unfortunately, the angle of wind and waves was such that the boat was rocking even more dramatically than Monday or Tuesday! Clipboards and towels almost went flying overboard!

We searched and searched in our usual area and were not able to spot a single dolphin. On our way back toward the island we did see a young manta ray, though! It stayed close to the surface for a little while, allowing us to observe it for quite a few minutes. It was such a wonderful surprise, and a nice addition to our turtle sighting earlier in the week!

As we approached the spot where we had seen the dolphins at the beginning of the trip we were doubtful that it would be possible for the dolphins to still be where we left them, but it seems luck was on our side.  Of course, we cannot be sure that they were the same individuals (until we review surface photos from the first sighting) but there was a group of bottlenose dolphins feeding in almost the same area as before! This group was not straying too far from the same spot so Captain Al decided we should try to take some underwater observations. As experienced Bimini dolphin observers we know that the best way to observe bottlenose dolphins while they are crater feeding is to remain at the surface and wait for them to surface for air. Diving down to get a closer look often drives the dolphins farther from the observing people. This technique worked perfectly for us. Our lack of advance allowed the dolphins to approach when they were curious and I was able to get many photos that I hope will be a useful addition to our existing catalogue. I even think I may have seen Tt#28, one of the bottlenose we saw on Monday!

The sun was close to setting by the time we pulled ourselves out of the water. The bottlenose continued feeding as we proceeded on our way back to the dock. At this point, the sky had cleared and the wind had slowed a bit more. It is humorous how wrong the forecast was for today! Good thing we ignored it; if we hadn’t we would have missed an incredible experience. Hopefully the rest of the week will bring us more good luck.

Until next time,
Nicole & Kel