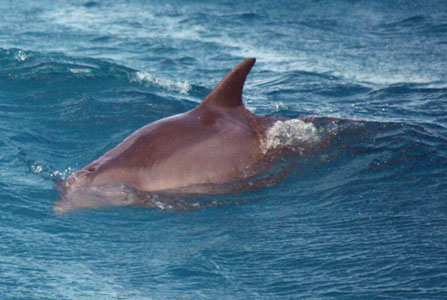 Now that the UNBSJ students have gone home, it is back to business as usual for us on Bimini. Monday began with catching up on office-work and photo ID. Then we set up the cameras and clipboards so that everything would be ready for the afternoon boat trip.

Unfortunately, I (Nicole) was on my own on the boat, while Kel stayed on shore. The boat set off at 14:30 as usual, this time with a full group of European guests.  It was another blustery day on the water, much worse than any day last week. Everyone had to make their way up to the bridge to avoid all of the sea spray. About 45 minutes after we had left the marina, I spotted a lone bottlenose dolphin just before it dove perpendicularly under the boat. Due to the waves and wind I was not able to see it again, and I was the only one who saw it at all—but I didn’t make it up, I promise! Just after the elusive bottlenose, Captain Al spotted a large turtle off the port side of the boat. It stayed at the surface for quite a while, giving the guests a chance to take a good look.

About an hour after the first bottlenose sighting, we spotted another solitary bottlenose dolphin. This one was riding the waves and deep diving—perhaps it was feeding along the seafloor. We observed this one for half an hour before it went out of view. I was even able to take some surface photos that I hope will be useful for identifying the individual later on. Another half hour later, we were retracing our path back to the marina when we came across a group of four Atlantic spotted dolphins. There was at least one mother-calf pair in the group and the little calf was zipping around in the waves. The other two dolphins were fairly young animals. It was hard to get a good look since the wind made the surface of the water ripple but these individuals jumped out of the water quite a few times so I was able to see that they did not have many spots. I was not able to identify the mother but I did notice that one of the other young spotteds was #102, a recent addition to our catalogue. We watched this group as it rode the waves and leapt out of the water for about 20 minutes before we decided to move on. Just five minutes after we left the group of four, we stumbled across a huge congregation of dolphins! No one was quite able to get a good view of this cluster as it all happened so quickly, but there may have been more than 15 dolphins, at least two of which were bottlenose dolphins! Captain Al is certain that the spotted dolphins included older individuals with many spots. I was even able to identify one of the bottlenose dolphins as Tt#28! We lost sight of this large group quite quickly—the waves and the angle of the sun made it difficult for us to see clearly.  We made our way back to the marina without seeing any other dolphins, though we did see many ocean triggerfish swimming just below the surface and mackerel leaping out of the water!

We made it back to the dock a bit early but I think everyone was ready for a break from the rocking boat. Hopefully the wind will pass before the week is over! I wonder what the weather will bring tomorrow.