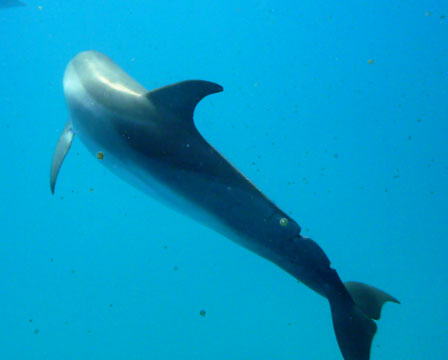 After breakfast, our Tuesday began with a heated debate on dolphin hunting…we ended up negotiating! Sustainability & humane turned out to be the key words. Typical Canadians! Overall, the conversation forced us to look at the issue from different angles and perspectives: for us, it isn’t a black and white issue.

After our debate, we watched a short video from the Bimini Blue Coalition documenting the current construction project off Bimini, as well as summary points from the project’s own Environmental Impact Assessment. We (the students) do not understand how this project has been allowed to proceed given the grave concerns put forth in that EIA. We discussed what the negative impacts of the construction and pier itself might have on the dolphins: turbidity, habitat loss, noise and more. This set us up for our guest lecture on bioacoustics from Dr. Kathleen Dudzinski. We learned how the anatomy of dolphin hearing is different – and the same. Of course, the lack of an external ear helps stay streamlined in the water! We found ourselves wondering if the construction on Bimini (which includes pile driving) will have temporary or permanent threshold shifts in the dolphins’ hearing.

After lunch (chicken Caesar salad, yum!), we departed at exactly 14:30. We began our trip by snorkeling at 3 Sisters – well, the biggest sister anyway. We saw a lot of diversity – more than other places we have seen so far. Fish included a trumpet fish, different damselfishes & butterfly fishes, sea fans and…fire coral! Luckily none of us touched it. We also saw some type of surgeonfish that had a disease. We aren’t sure what it is, but black dots were scattered on their scales…Hmmm….

We had to search for a while before we found dolphins, but when we did, there were lots. This time, all the dolphins were Atlantic spotteds. At first, there were 10 individuals, including 2 calves. The group size changed throughout the afternoon giving us a firsthand look at their fission-fusion society. The first time we got in the water, we could not see any dolphins, but we could hear them! Maybe they knew we had an acoustics lecture this morning! It was definitely cool to be able to hear them even though we couldn’t see them. And, of course, we found ourselves looking around trying to find the direction of the sound – but our terrestrial ears couldn’t locate it!

Later we were able to have an underwater observation. The dolphins came very, very close to us. They were moving up and down in the water column, coming together and swimming apart. We all noticed an older calf with very distinct notches in its peduncle. Kel says we’ll be able to ID it when we review our photos*! After being in the water, with the wind picking up, we were shivering, even in The Bahamas. And, sadly, we also learned that snorkel gear doesn’t float (good thing for rental backups!).

Dinner was one word: Amazing. Ms. Stephie came and brought us our first Bahamian dinner. The chicken and peas and rice were awesome…but we’re all still drooling over the mac & cheese. And, banana bread. Okay. Okay. We loved it all! Thank you Ms. Stephie.

What will tomorrow bring?
UNBSJ 2014