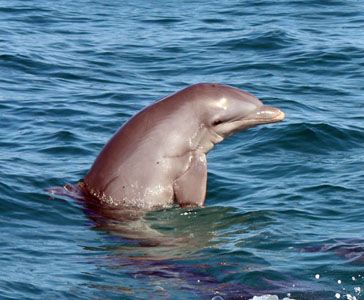 On Monday morning, we had a guest lecture from Dr. Justin Gregg, “Are Dolphins Really Smart?” Dr. Gregg joined us via Skype and shared a lot of information, including a definition of intelligence: how closely a thing’s behavior resembles the behavior of an adult human. He gave us an introduction of the study of intelligence including the work of Dr. Lilly (wow). We learned about EQ – and the challenges of using EQ as a measure of intelligence. There was lots of discussion of brain morphology and specifically related all of this to dolphins.

In the afternoon, we used a different boat, so that meant a new orientation. The day was so awesome! The boat was a bit rocky, and some of us felt its effects, but we did get to see our first mixed species dolphin group. There was a lot of surface activity, including a mating ball. When were able to enter the water, we saw the way the dolphins went to the bottom together as group. Again, there was also a big cushion star on the sea floor. The dolphins were very fast moving, so the encounter was short compared to the previous observation. The dolphins did not pay us any attention; on Saturday the dolphins showed more interest in us. Today, it was all about them! In the field, we were able to ID Split Jaw (#22) and Lil’ Jess (#35). When we review our photographs, hopefully we will be able to ID some more!

After dinner, we ate ice cream and watched The Cove. This film was in preparation for our debate assignment on the topic of dolphin hunting.