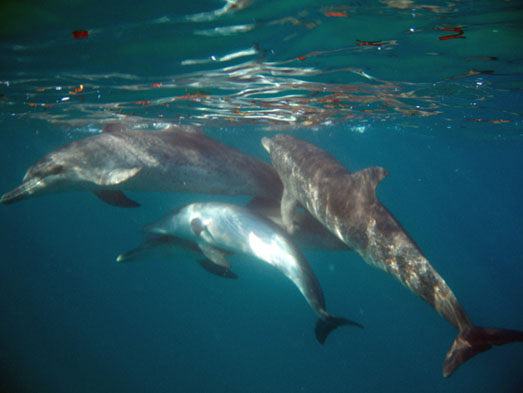 Tuesday was a busy day beginning with a presentation on the importance of, and skills required for, photo identification. The Hunter College students were very engaged, asking many good questions, and Salma and Nicole learned a lot as well!

After a break for lunch and a bit of computer work, we headed out with Bimini Adventures. A few hours after heading out, Captain Al spotted some splashing in the distance. We headed towards it and came across quite a few spotted dolphins. We caught the attention of two mother-calf pairs who started swimming alongside the boat. From our vantage point on the bow we were able to identify Leslie (#80) with her calf (#99) and Tina (#14) with hers! While they were riding on the bow, Leslie’s calf decided to swim belly-up, giving everyone a good view of what we now know is his belly! After a while, it was time to try underwater observations. The four dolphins stuck around to investigate the humans for a while so we got collect lots of data, including this photo! Once everyone was back on board we set off again towards splashing in the distance. This time it was a group of at least six spotted dolphins. From the boat we were able to confirm Stefran (#82) and Swoosh (#36)! After about a half hour with us, these dolphins decided to continue on their way. But we weren’t worried at all because less than five minutes later, there were three more spotted dolphins riding on the bow and in the stern wake. This group was leaping and playing and doing flips in our wake for a few minutes before they, too, went on their way. Then, only ten minutes later, we found another group of spotted dolphins!! This time there were up to thirteen individuals including Tilly (#87), Romeo (#10), Split Jaw (#22), Billy (#64), Tim (#69), Speedy (#78), Inka (#93) and Lil’ Jess (#35) with her calf! We can’t wait to review the video and photos!

Once everyone was back on board we realized that it had gotten quite late! The sun was setting, painting our way back to the harbor. We are so happy with our luck today and cannot wait to go back out soon!