Wednesday was another great day on the water for DCP! We started our boat trip by stopping at “The Bimini Road”, a popular snorkeling site, to explore 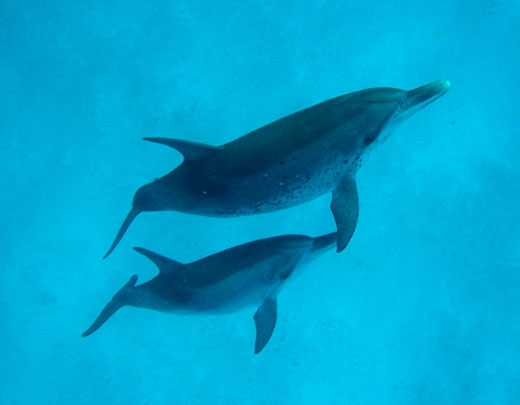 for a bit. We saw plenty of colorful fish and even some fish that blended in almost perfectly with the sandy seafloor! We also learned why the alternate name for this site is “Atlantis” – the rock placement under the water is so purposeful, you couldn’t help but think if they really were the remnants of a lost underwater city! After our snorkel stop we hopped back on board to continue our search for dolphins.

After quite some time we happened upon a group of spotted dolphins! The group was comprised mostly of mother-calf pairs and so we had to be extra mindful of maintaining a respectful distance. Prior to observing the dolphins under water, we watched them from the bow. We were able to identify quite a few dolphins! We saw Leslie (#80) and her calf (#99), as well as Tina (#14), possibly Cerra (#38), and another adult female (could it have been Niecey, #48?). There were two more calves taking turns swimming in the bow wake; one is very likely Tina’s, but we are not sure if the last one belongs to Cerra or the other adult. After observing from the bow for a little while, Captains Al and Audley gave us the okay to swim. After carefully getting into the water, we started swimming to get a better look. This swim had a busy feel about it, but it turned out wonderfully and everyone came back on board, amazed with the experience we were all so fortunate to have.

The dolphins all went on their way, and we had noticed that it was getting late. As we were heading back for home, a guest had noticed a dolphin swimming near the bow! Soon that dolphin was joined by another, and another, until we had six dolphins riding the bow wake! This was a different group of dolphins than the one we had seen earlier in the trip. This group was comprised of only sub-adult and adult dolphins. Because it was getting late, Captain Al told us all to quickly get ready while Captain Audley tried to position the boat so that we would be able to get a glimpse of the dolphins underwater. However, these dolphins were probably just bidding us a good night, and had departed just as quickly as they had arrived. It was still a mesmerizing experience to watch them swim so elegantly with the bow – it’s a sight that will never grow old! We continued home and we all arrived back on shore with huge smiles.

We can’t wait to see which dolphins we’ll see next time!

Until then,
Salma, Nicole & Kel