Monday was a long, full day out at sea for DCP! We started off by hopping aboard with Bimini Adventures and the international guests for a snorkel trip 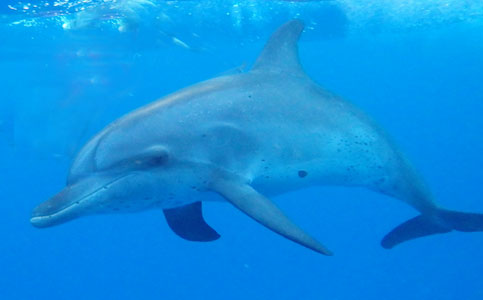 and lunch on the ocean. The sun was shining and the water was a refreshing relief from the heat and so everyone took advantage of our stop and cooled off near the reef. After our water time, we were all back on board for some lunch before we began our search for dolphins.

Our search for dolphins was quite a long one. We were even heading for home right before we saw a young spotted dolphin jump right in front of our bow! Everyone’s sun-worn spirits were instantly lifted! From the boat we observed a group of 9 individuals. While Nicole & Salma took notes, Kel headed to the bow to see which dolphins were present. Kel didn’t recognize many, which surprised her; but, it’s possible that one was hard to recognize because it was Finn (#09)! Unfortunately, the sighting of Finn cannot be confirmed, but we’ll be extra diligent about keeping our eyes for her now. Finn has not been seen in several years, which means a re-sight would be very exciting, but difficult because she will have developed many new spots since she was last seen. Surface notes completed, it was time to try for underwater observations. As soon as we entered the water we saw a couple of playful dolphins under the bow. The dolphins zipped in and out from the area in which we were swimming. The captains did a slow, steady loop around us and the guests and sure enough they had two dolphins riding the bow! It was a mesmerizing sight to see underwater! The dolphins already make swimming look effortless, however when they were zig-zagging with the bow, it was as if they were flying! Once the dolphins saw us, they came swimming over to investigate us and swam in and out of the group. We even saw a young dolphin, pictured here, that had a spot on his belly that looked a lot like Speedy’s mark! Tricky dolphins trying to confuse us!

After the young dolphins had their fill of looking at us, they swam off a bit and began playing with each other. One dolphin was on its back and was enjoying a belly rub from one of its friends! After we
couldn’t see dolphins underwater anymore, we jumped back on board. We were still able to observe a few more dolphins on the bow. Soon after, we continued our course back home.

Monday was a great, sunny day! The interns are really enjoying their time here in Bimini and love seeing the dolphins whenever they are able!

Until next time,
Salma, Nicole & Kel