It’s that time of year: students from University of New Brunswick Saint John are in Bimini! On Thursday morning, six of us packed up and departed the SharkLab, where we had spent the last week. We were sad to leave, but we were ready to experience something new. We met Kel at the South Bimini water taxi and headed North. Two of us were still in Fort Lauderdale ready to get to Bimini for the first time! We left the hotel and headed to the airport – but our flight was delayed slightly due to rain. Dr. Turnbull was waiting for us on Bimini, and we headed to North Bimini to meet the rest of the group. Everyone was optimistic (get the title? “dolphin-mistic!”) that it was going to be a great course.

After orientation at the Sea Crest, we got ready to go on the boat for our first dolphin trip. Soon, we did a “dolphin drill” to practice getting in our snorkel gear and getting on and off the boat. We did not see any dolphins, but we did stop and snorkel “The Road to Atlantis” (aka Bimini Road). Some of us think that it might be man-made, but not Atlantis. Others were expecting it to be more spectacular. For those of us who had been to the SharkLab, we recognized many of the fish species; for those of us who just arrived, it was great to see so many new fish! All the fish back home are so bland compared to these!

The weather was getting bad, so we came back, had an early dinner and watched the movie DOLPHINS.

On Friday, we woke up and had breakfast together, followed by a lecture on the dolphins of Bimini. After the lecture, we headed straight to the boat (without Kel ;-(. We headed to the Sapona to snorkel to compare the species diversity and abundance between the port and starboard sides of the concrete ship. We all agreed the port side had more fish, but the starboard had more coral and sponges. On the way back…

We saw dolphins! At first, we saw 3 Atlantic spotted dolphins, but soon we saw 4. We followed them for a little while; there were 3 adults and 1 calf 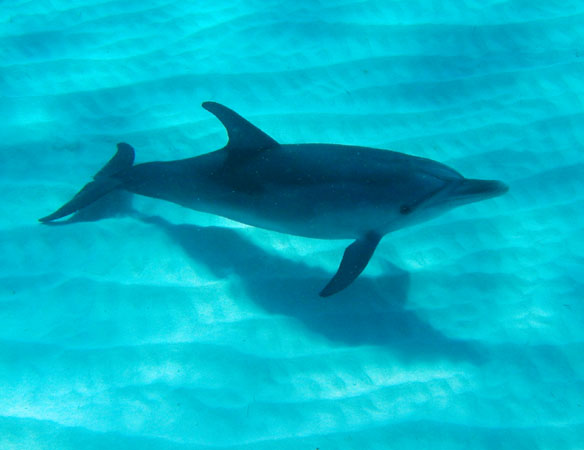 (picture here – thanks Professor Turnbull!). At first, five of us got in the water to observe the dolphins. When we first got in, the adults did not interact with us, but the calf did; it was most interested when we were fully under the water and not just resting at the surface. A few of us saw the dolphins feeding – some from the boat and, for the second group of swimmers, under water. The second group also saw the adults interacting with each other – two paired up and had a lot of pectoral fin contact. The calf was a female and one adult was a male. The male adult swam up to us and seemed to check us out. After this great first encounter, we headed back to shore (to brag about it to Kel!).

After lunch, we had a lecture on photo-identification. Then it was time for the boat again. We headed in the same direction as we had seen the dolphins this morning; Nadine saw an eagle ray leap completely out of the water! But, the dolphins were no longer there, so we continued on the normal path to search for them. Unfortunately, before any dolphins were sighted, the weather was again threatening, so we had to return to shore.

We had a delicious supper and then watched The Cove. We turned in our work for the day and headed to bed!