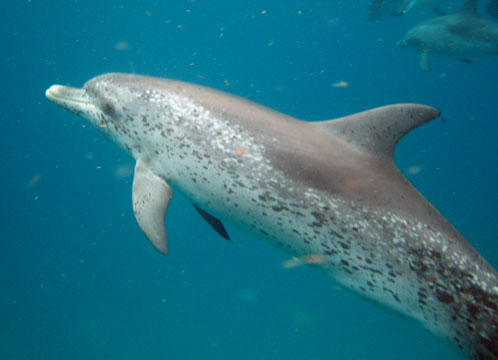 Our Thursday morning began with a discussion on interspecies interactions, specifically between the spotteds & the bottlenose of The Bahamas. We covered two articles and Kel went into more details on her work here in Bimini, including watching video clips from earlier this week. It was interesting to see the different observations and conclusions that came out of both studies, and the different approaches to interpreting aggression and sexual behavior, and the overlap of each. Research certainly evolves over time.

During our afternoon break, we went to The Dolphin House. Some of us had fairly low expectations, but it really was cool – you could stay there for a week and still discover new things! The owner’s style was definitely eclectic – hopefully we can help him finish his license plate collection. We also used our break to work on our assignments and/or go for a beach walk, despite the swells!

Since the weather was still bad in the afternoon, we worked on photo-ID from our morning trip on 4 June. We were much more successful today! We confirmed Tina (#14), Lil’ Jess (#35) and, possibly Niecey (#48). It was really exciting to confirm #14, who is pictured here. There were two borderline calf/juveniles and a juvenile, the latter of which we nicknamed “Tassel” because of the obvious tassel barnacles on the fluke. There was also an adult female that was either pregnant or nursing, but we were not able to match her to an ID in DCP’s photo-ID catalog. Yet. The afternoon showed us how photo-ID is like a challenging puzzle; it’s fun and rewarding, but sometimes the hard parts can be frustrating. It takes a lot of hours to process just one day’s photos and videos! In addition to reviewing the still photos, we reviewed video; it was really cool to watch video that we were actually present for the recording! And, having multiple cameras, video & still, made it interested to see multiple angles of the same event.

We had a BBQ chicken dinner and settled in for the first half of “We Bought A Zoo.” A bit Hollywood, of course, it was a nice way to spend the evening and it has good conversation starters for discussion on captive animal enrichment. We can’t wait to finish it tomorrow!