We decided to change our plans a bit due to the uncertain weather forecast and on Tuesday we had an early breakfast and departed on the boat at 9 a.m. By 10 a.m., we were with dolphins! First, we saw about six bottlenose, but they were evasive, so we left them. Soon we saw a group of spotteds and they were soon joined by two bottlenose. Half of us got in the water, but the dolphins were on the move. We popped Dr. Yeater in the water, in the hopes of getting at least a brief video clip for photo-ID, and she saw eight dolphins all of which passed by quickly. We followed them for a very long time and there were 3 mother/calf pairs – it was interesting to watch the two older calves go between the boat and the moms. The very young calf stayed with the adults. We saw the different positions of the calf relative to mom. When the mom and the calf surfaced to breathe, the mom always came up just slightly ahead of the calf. Several of the dolphins had tassel barnacles on their flukes and we were able to see this when the dolphins were riding the bow. The dolphins were traveling this whole time, but eventually they stopped. We found ourselves wondering why and then we realized they had met up with more dolphins – now there were at least 14. We weren’t sure if they would stick around, but we decided it was time to try. They were moving quickly, but we were able to keep up and collect video and photo data. There was “mating” behavior going on as the oldest dolphins shifted from the outskirts of the group to the center. We hope our video and photographs are useful to DCP!

We headed back to shore for lunch and a quick break when we were pleasantly surprised by being told we needed to be back on the boat at 3 p.m. This 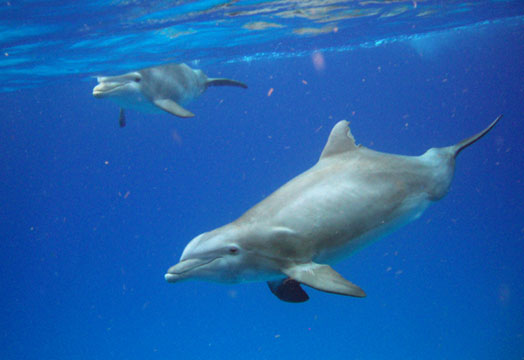 time we once again did not have to wait long; we saw a lone bottlenose dolphin that was not interested in us and difficult to keep an eye on. Soon after leaving this dolphin we found a larger bottlenose group and saw crater feeding for the first time – that was cool! The craters were impressive and as the dolphins were on the sand, we could see them headscanning. Someone even saw a dolphin catch a garden eel. We could really hear their echolocation and when they came to the surface to breathe, they would check us out. Some even came up to the surface in synchrony. One in particular, with a damaged pectoral fin, was quite inquisitive about us at the surface. There was lots of stuff in the water and we all got lots of stings – but it was worth it! Back on the boat we took one more spin to see if we could find anything else before heading in and…

We did! It was a mixed species group and they were very active at the surface. Their excitement showed in their pink bellies. This time, Kel got in the water alone with the MVA and we were able to observe, from the boat, the dolphins approach her. We look forward to watching the video data to see the mixed species behaviors; and even the bottlenose only – it’s Kel most interactive experience with Bimini bottlenose and one of the only times she’s been able to confirm females in a mixed species group.

On our way back in, we saw spotteds two more times; first a single dolphin, then two; however it was getting late so we had to keep going toward shore.

We ended the night with soft tacos and lots of laughter!