Thursday was the first day that Pam and Liana were separated to go on different boat trips. Pam went with 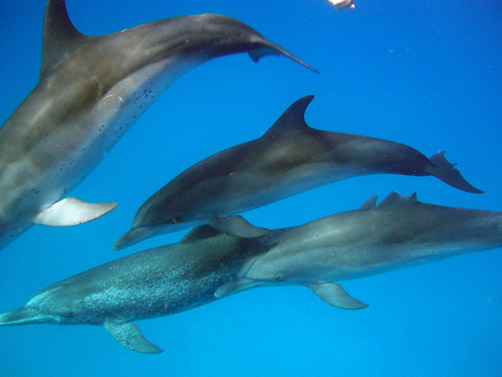 Bimini Undersea, while Liana went with Bimini Adventures. Separating like this allows us to have the best chance of seeing a large amount of dolphins!

Pam had a great day with Bimini Undersea. The boat left under a mostly cloudy but beautiful sky. A little bit less than an hour into our travels, we spotted a group of four bottlenose dolphins. We observed them about ten minutes from the boat, because they were on the move. Shortly after we left them, we saw some more dorsal fins in the distance! It was a group of about nine dolphins. Seven of them were spotted dolphins while the other two were bottlenose—a mother and calf pair. Among the dolphins we think we saw Addie (#84) and Inka (#93). We were able to get in the water with them and while they didn’t hang around too long, we had a good observation nonetheless. The excitement was not over! About ten minutes after leaving this first mixed group, we encountered more dolphins. This group of five dolphins was all spotteds. When we first saw them, they were jumping out of the water! We were able to get in the water with this group as well and they were very playful and the guests had a lot of fun with the dolphins frequently swimming around them in circles. Tilly (#87) and un-named #97 were both present in this second group.

Liana also had a great trip. It was the final of trip of the week Bimini Adventures, and the passengers were eager for dolphins. It was sunny and warm as we left the Sea Crest, but the seas were a little rougher than the past few days. We searched for a few hours, took a swim break to cool off, then continued along the normal dolphin route. Finally, after almost three hours we were greeted by a group of five spotteds just off the bow: some of the same dolphins as Pam had seen! Among the group was Tilly (ID#87), an adult, and three juveniles. They rode the bow for a little bit, and finally slowed down long enough for us to get in the water with them. During our encounter, Tilly was incredibly playful. She kept picking up a piece of seagrass and putting it on her head. The dolphins finally decided they were ready to move on, and headed to the bow. We moved with them, content to watch them enjoy the water near our boat and watch their antics. This group of five eventually joined a larger group of spotteds, including Tilly (ID#87), Inka (ID#93), one very spotted adult, and three juveniles. Our second encounter was shorter, but everyone boarded the boat with smiles on our faces. As we headed home, one man expressed his feeling of calmness and tranquility when swimming and watching the dolphins. He thought this was one of the best experiences you can have, and wished more people were lucky enough to have this kind of opportunity. The Hatteras was the last boat into the Bimini Harbor, but returned bearing a ship full of happy, exhausted passengers.

Now that the spotteds have made an appearance, we hope to keep seeing more of them in our last week in Bimini!