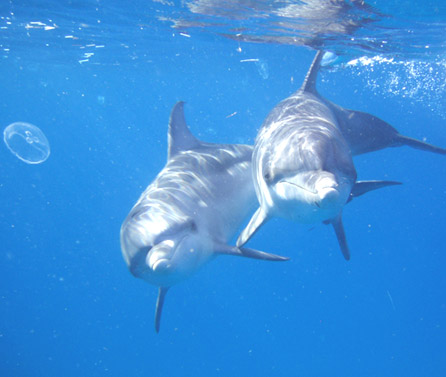 Wednesday’s trip with Bimini Adventures was the fourth day for the guests, and everyone (including us) was eager for dolphins. While the hot sun beat down on us as we set out, some clouds loomed in the distance, and we all tried to ignore the possibility of any incoming storms. Our trip set out at 13:00, to give the guests the opportunity to snorkel at “The Bimini Road” (aka “Atlantis”). Afterwards, we searched and searched for dolphins but it was beginning to feel hopeless. But just when we thought we weren’t going to see anything, we spotted some dolphins! They turned out to be a group of about 13 spotted dolphins and for a while they were happy to bow ride with us, but we weren’t sure if they would pause long enough to let us get in the water with them. They did! The humans hopped in the water and were immediately surrounded by dolphins. We were able to get incredible photos and video using the Top Dawg since the dolphins came so close. Our encounter lasted about twenty minutes, and we were happy to see many familiar faces (spots?) in the group, including Lil’ Jess (ID#35), Tilly (ID#87), Inka (ID#93), Noodle (ID#94) and un-named ID#95 (pictured here) and ID#97. The group was pretty young overall, and we saw at least three calves as well.

The spotteds seemed very interested in us, and at separate times circled both Pam and Liana very closely. We and the guests had great experiences — this was definitely our best encounter yet! One of the guests had adopted Inka (ID#93) the day before, and she was thrilled to actually get to see her. After the dolphins decided to move on, everyone returned to the boat extremely happy; this encounter was more than anyone could have asked for. We spotted four of the dolphins again a short time later and had another short water entry. We returned to the Sea Crest more than satisfied with a fantastic day!

Until next time,
Pam & Liana