This morning the three of us did a beach clean up! This clean-up was sponsored by DCP Conservation Member Christine – thank you! We chose the area around the south point of North Bimini because it is known to be an area where a lot of trash ends up and is close to the ocean (but, what isn’t close to the sea in Bimini?!). We picked up lots of stuff, including lots of plastic and styrofoam, aluminum cans, and even a couple of shoes! In total, we collected 11 bags of trash and 3 bags of recycling. It was nice to do something simple to give back to Bimini and it showed us how easy it is to make a difference. If you are interested in sponsoring a beach clean-up in Bimini, consider becoming a Conservation Member today!

Pam and Liana headed to sea with Bimini Undersea, potentially for the last time of their internship. It was a beautiful day, with mostly clear skies and little wind. Everyone on the boat had high hopes of seeing dolphins. There were guests onboard from different resorts, including some children who were anxious to see dolphins in the wild for the first time. About an hour after setting off, we saw three bottlenose dolphins, including a mother calf pair. They seemed to be feeding because they surfaced momentarily and then disappeared for up to five minutes at a time. They didn’t appear too interested in us, and so we left them to search of more dolphins. About 40 minutes later, we ran into another group of 3-4 bottlenose close to a current line. One in the group was exceptionally big. They were being very elusive, and every time we tried to get close to them, they dove beneath the surface. We followed them for about a half hour before we left them to make our way home. On the way home, we stopped for a quick swim break, and while we were in the water, a few more bottlenose were spotted near the boat. Suspecting this was the same elusive and fast-moving group, the captain decided we would not pursue them for too long. Though we didn’t technically get any time in the water with the dolphins, it was still exciting to see some action. 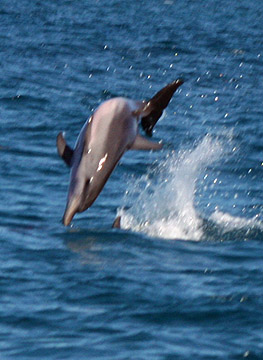 Meanwhile, Kel was once again aboard Bimini Adventures’ dolphin trip. The fairly seasoned group of passengers first enjoyed seeing a group of at least seven bottlenose dolphins. Kel collected still photographs (for dorsal fin photo-ID) while they took a quick peek of the crater feeding dolphins under water. As we continued in search of dolphins our captain saw a quick glimpse of “someone” but we never found that dolphin. Thankfully we soon found ourselves with at least ten Atlantic spotted dolphins, including a calf that announced itself by leaping toward the boat and, we think, Freckles (#15). We were able to observe this group under water, including a fantastic object play interaction between Juliette (#12) and her (presumed) calf with a large piece of sargassum. It was very interesting to watch. Later in the day we saw more spotted dolphins, which were being very active at the surface, as you can see in this photo. We think we saw Tim (#69) from the boat and, under water, we saw Speedy (#78), Inka (#93), Milo (#96), un-named #95 and possibly #98 and several more we should be able to recognize when we review the video. In fact, we might even be able to add a dolphin or two to our photo-ID catalog after today’s data collection!

It was another great day in Bimini, one that has left Pam and Liana hoping for one more dolphin trip to say goodbye to the Bimini dolphins!