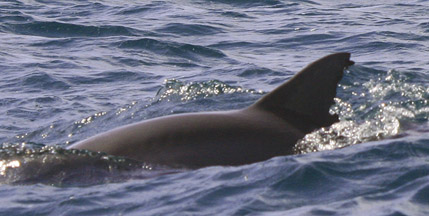 On Monday, somewhat high winds threatened to keep us all on shore. As it turned out, Pam & Liana continued their “office” tasks while Kel headed out with Bimini Adventures. We knew the choppy seas might keep us close to shore, but we remained optimistic. Not too long into the trip we suddenly saw a group of 5 bottlenose dolphins, including at least one youngster. Although we saw the group very clearly and quite close to the boat, it was a short-lived sighting as we could not keep our eyes on the dolphins as they surfed the swells. But, Kel did grab a quick photo of this dolphin’s very distinct dorsal fin (pictured here). Hopeful this sighting was simply meant to warm us up for more dolphins, we kept searching. With squalls threatening, we took our search closer to the lee of Bimini – and we were not disappointed! Suddenly we had four Atlantic spotted dolphins near the boat, presumably two mother/calf pairs. The passengers got in for a nice swim while Kel made surface observations. Content that our efforts were not in vain, we headed in.

After today, we can’t help but wonder what the rest of the week will bring!
Until then,
Kel, Pam & Liana